Because I was so anxious to know something, I arrived at the doctor early.  Fortunately, they ushered me through the steps rather quickly.  Different from last time, they weighed me and took my blood pressure.  Then I waited (briefly) to see the doctor.  The chat with the doctor was: How are you feeling? A little gassy.  I’m going to do an ultrasound.  Ok.  Back out to wait again.  Then I was called into the exam room where I waited (briefly) for the doctor to come in and do said ultrasound.  At first, nothing came up and I swear I couldn’t breathe.  Then she saw what she was looking for.

I know it doesn’t look like much but you’re looking at a picture of the yolk sac.  Google 5 week ultrasound and you’ll see the same thing.  I did prior to going to the doctor, so I’d know what I was looking for.  Today I’m 5 weeks and 5 days.  So as Faith would say “five by five” (though you know probably not in that context).

In my mind (prior to going to the doctor) I thought about how I would react to see signs of growth.  Would I cry?  Would I be unable to stop smiling?  What really happened was that I heaved several sighs of relief (which I have continued to do throughout the day).  Of course, I’m not foolish enough to think I’m out of the woods yet.  About 6 more weeks until that happens.  Also, I asked the doctor to check my progesterone because I’ve been diagnosed low progesterone in the past.  She was like “Sure but it’s not covered by insurance.”  Okay, so how much do you think that blood test cost as well as ultrasound and urine test?  Give up?  It was about ¥7000 (around $70).  America, y’all need to get on board.  Ok back to the progesterone test.  She said my levels were fine, and I needn’t worry.  Sighs of relief all around.  Meanwhile, I’m super relieved and can rest a little easier I’m sure.  (Or I hope.)

After the doctor, I immediately went to the city office to register the pregnancy (after a quick stop at Starbucks, of course).  I have 80 million pages of text to read through, they gave me a coupon book for tests, a record book for mama and baby, as well as various other things like a nutrition booklet and a checklist, etc.  Most importantly I got this: 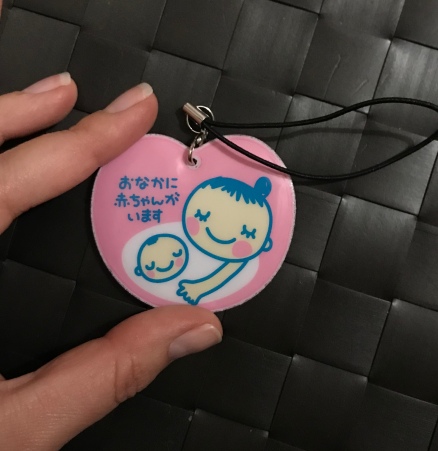 It says おなかに赤ちゃんいます。Loosely translated it says “Don’t be a rude fucking asshole because I’m preggo.”  (Or “There’s a baby in my belly.”)  I much prefer my translation.

So how do I feel?  To be honest, still a bit shell shocked.  It hasn’t entirely sunk in that THERE’S A BABY IN MY BELLY!  All the preggos I talked to said it becomes more real as time passes and the baby continues to grow which he better do!

Also, it’s worth mentioning that Mamoru said the sweetest thing when I told him the good news.  He said “I want to give you hugs.”  That’s right folks.  Hugs.  Plural.  This is the Mamoru that I love to the moon and back.  I’m so glad this guy replaced that cold sofa-sleeping sad sack who hung around a lot when we first moved here.  That Mamoru is definitely my least favorite.  Anyway, for right now happiness and peace reign in The Moon Kingdom.  It won’t be long before (I hope) we welcome a Small Lord into our palace.

I’m off.  I’ve got a freelance meeting in one hour which means I need to get on the train soon.  Thank you for all the well wishes.  I really appreciate them.

6 thoughts on “What happened at the doctor…”